Rare Earth Elements (REE) are obscure, but critically important metals found at the bottom of the periodic table.    REE are essential in catalytic converters for automobiles, permanent magnets, electric motors, and the color phosphors that make our television and computer screens light up.  As the name implies, REE are rare.  Major economic concentrations of REE occur primarily in only three places in the world:  Mountain Pass (California), Olympic Dam (Australia), and Baiyunebo (Inner Mongolia, China).  The Russian Federation also has large reserves.  Although the Baiyunebo deposit is by far the largest deposit, much less is known about Baiyunebo than Mountain Pass and smaller deposits because it is a relatively recent discovery in a very remote part of China.
Research on the Baiyunebo deposit in the last ten years has produced conflicting reports in the scientific literature.  The REE occur as minute grains of obscure minerals associated with iron oxide and other carbonate minerals that replaced Proterozoic H8 dolomitic marble.  Most, but not all, workers agree that the REE minerals crystallized from very hot (>300ºC), saline brines several hundred million years ago as the brines flowed through cracks in the marble.  The controversy lies in how those hot brines and the marble formed.
REE-bearing rocks at Baiyunebo occur as large pods of magnetite within the belt of layered marble and metamorphosed sedimentary rocks of the Baiyunebo group.  Although other layered sedimentary rocks in the district formed as sediment deposited in a shallow sea, the layer of rock that became the marble (unit H8) has chemical characteristics that suggest it may be volcanic in origin (Le Bas et al., 1992, 1997; Yuan et al., 1992). 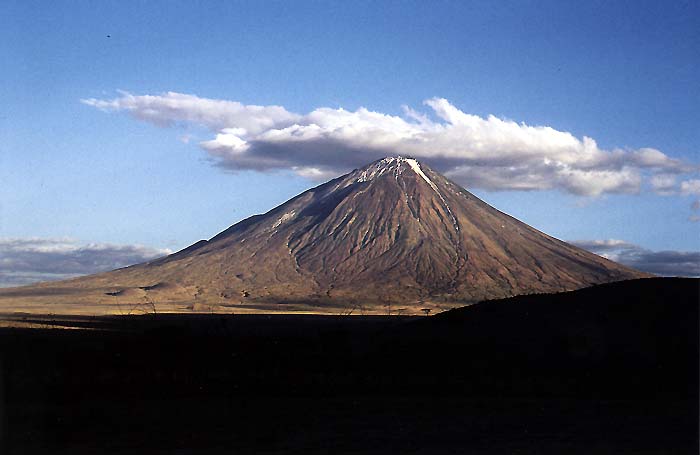 If the H8 marble was volcanic in origin, it may have once looked something like the strange carbonatite-type volcanoes we see today at Ol Doinyo Lengai volcano in the East African Rift.  The Mountain Pass REE deposit in California is also associated with carbonate-type volcanic rocks.  If the H8 marble represents a carbonate volcanic rock, then the H8 marble may have been an important source of REE in the deposit.  Alternately, some workers claim the H8 marble was originally deposited as a sedimentary rock like limestone in a shallow sea (Meng, 1982; Chao et al., 1992, 1995).  Because normal sedimentary limestones contain essentially no REE, a sedimentary origin for the H8 marble would suggest it was not a potential source for REE, thus requiring some other source for the REE.
Regardless of whether the H8 marble is volcanic or sedimentary in origin, the formation of the REE-rich magnetite rocks required the circulation of hot, saline brines called hydrothermal fluids.  These hot brines leached REE from a source rock and then deposited REE minerals by chemically replacing parts of the H8 marble.  We see evidence for these ancient hydrothermal fluids in the form of tiny pockets of water trapped within mineral grains in the rock.  By studying these tiny water pockets, called fluid inclusions, we can deduce the temperature of the hydrothermal fluids and certain chemical properties of the fluid (Smith and Henderson, 2000).  Because hydrothermal fluids are chemically reactive with many of the rocks through which they pass, we can track the pathways that the ancient hydrothermal waters followed by mapping the locations of rocks with the subtle mineralogical changes that resulted from chemical reactions (called hydrothermal alteration).
Taking together the theories for the origin of the H8 marble and the hydrothermal fluid mechanism for concentrating REE, three possible genetic models for the formation of the deposits appear to be the most plausible:
This project ultimately hopes to distinguish between these three models by documenting the hydrothermal alteration of the rocks in the field and then deducing the chemical characteristics of the ancient brines through lab studies at Kutztown University and elsewhere.

This research proposes to answer the question of the genetic origin of the hydrothermal fluids responsible for REE transport and deposition in the Baiyunebo REE deposit.  The three prevailing hypotheses that will be tested are as follows:
1) The fluids emanated from a subterranean/subvolcanic body of molten rock (magma) that was:
a) Carbonatitic in composition, possibly in a shallow, rifting sea-floor setting. b) Granitic in composition and significantly younger than the H8 marble unit (unlikely in view of field results).
2) The hydrothermal fluids were of non-magmatic origin and significantly younger than the H8 marble unit, potentially circulated by magmatic heat, but deriving their REE from leaching of surrounding rocks, or
3) The deposits are actual carbonatite material crystallized  directly from molten carbonate liquid

By determining the chemical composition of the hydrothermal fluids and the physical conditions of fluid flow, we can eliminate certain mechanisms for the formation of the hydrothermal fluid.  The objectives of this project are to characterize the spatial distribution of alterd rocks in the Baiyunebo area and to build a database of specimens for in-depth analysis in the lab.

Due to restrictions on sampling and access by Baotou Steel Corp. (the owners of the mine), we were not permitted to collect rock samples or take photographs because we are foreigners.  Unfortunately, REE mines everywhere in the world are known for being annoyingly hyper-secretive - almost as bad as diamond mines.  I've heard that similar restrictions have been in place for people working at the big REE mine in the United States.

The fieldwork in the summer of 2004 did produce two cross sections across the district that detail the distribution of rocks that have chemically interacted with ancient thermal waters.  We mapped variations in vein types and abundance in the rocks surrounding the mine, which suggest the paths taken by hydrothermal fluids were significantly wider spread than the mine area.  Our Chinese coworkers from the China University of Geosciences - Beijing were permitted to collect samples (they are not foreigners), so characterization of the rocks will depend in large part on them.

Subsequent laboratory analysis of the minerals in the rocks will allow us to constrain the chemical characteristics of the fluid thermodynamically.  The results of the summer 2004 work on this project also extablished a research tie with the China University of Geosciences and so paved the way for student projects for years to come and will form the basis for an NSF grant proposal in future projects in China.

Because Baiyunebo is the largest REE deposit in the world, it is of great strategic and economic importance both to China and the to rest of the industrialized world.  In view of the peculiar conditions required for the dissolution and transportation of REE in brines, Baiyunebo effectively presents a natural laboratory for the study of REE transport in the upper portions of the earth’s crust.  Understanding the mechanisms by which REE deposits form allows us to develop strategies for mineral exploration.  Characterizing the geology of these deposits also allows us to preemptively prevent environmental damage caused by mining by identifying potential chemical interactions between mine wastes and rainwater.

The fundamental objectives of this project will be to constrain the physiochemical conditions of REE mineralization in dolostone-magnetite rocks of the Baiyunebo district and to evaluate the potential relationship between processes that governed the evolution of the Baiyunebo and processes that formed other REE deposits.  We are following a two-pronged approach that integrates our fieldwork with laboratory studies.     Geologic mapping and sampling of Baiyunebo rocks I worked with three Kutztown University undergraduate students in the summer of 2004 in China during which we attempted to do the mapping and sample collection phase of the project.   Laboratory studies of rock samples to determine hydrothermal fluid characteristics The physiochemical conditions of hydrothermal activity will be constrained using standard petrographic techniques integrated with thermodynamic geochemical analysis.  Polished thin sections were preparation commercially.

Preliminary arrangements have been made with a heavy isotope lab for analysis of carbonate rocks.


Back to Kurt Friehauf home page

Back to Introductory page